la strada Fahrzeugbau GmbH is a leisure vehicle manufacturer specialized in compact camper vans. During the company history of more than 30 years, the company from Echzell in Hesse has established itself in the motor vehicle segment of converted camper vans. In this segment that has been strongly growing for years, la strada defines its market position on the basis of the quality of the used materials and their high-quality processing. 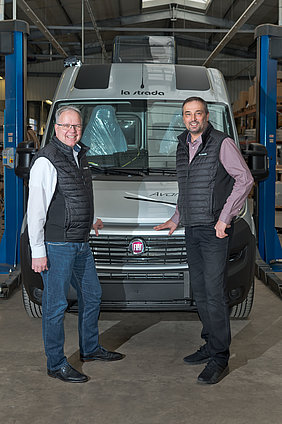 Besides the serial production, many processing steps are executed in manual work. The quality of every vehicle fulfils, as always, the high requirements of a manufactory. That is why la strada considers itself, with all camper van series, as a prime supplier in its vehicle segment.

Starting as a small family business, the camper van manufactory has developed into a small series manufacturer operating all over Europe. Thanks to the European type approval in accordance with General guideline 70/156/EEC, the camper vans built now in Echzell are admitted everywhere in the European Union. For a leisure vehicle manufacturer of this size, this is an equally advanced as well as unusual achievement which has become the foundation of a growing European dealer network. About 30 contractual partners in the European countries are selling la strada camper vans from Moscow to Great Britain and from the polar circle to Provence. 19 other commercial partners serve the German clients of la strada. The distribution network of the Hessian camper van manufacturer comprises also an exotic dealer in the vicinity of the Japanese capital Tokyo.

Around 325 vehicles are leaving every year the 14,000 square meter large factory premises in Echzell. The production hall, which was expanded and modernized in 2008, belongs now to the most modern manufacturing sites of camper vans in Europe. Around 50 employees build here, under the guidance of the owners Marco Lange and Andreas Dalchow, about ten different models in the three series Avanti, Regent and Nova. Thereby now mostly transporters of the marks Fiat Ducato serve as a base for the Avanti series and Mercedes Sprinter for the Regent and Nova series. In its long history, the camper van company collected experience from almost all current van manufacturers. The first development was in 1986 on the basis of Volkswagen T3. Shortly afterwards, it was followed by a series based on Mercedes MB 100. Then followed models from Citroen, Ford, Renault or Mercedes Vito. In the 80s and 90s, it was experimented even with small vans of Asian marks.

A turning point in the history of la strada was the introduction of la strada Nova in 2000. Then la strada left for the first time the terrain of the camper van vehicles. At the same time, Nova was the cornerstone of the beginning orientation towards the prime segment which is now implemented consistently in all series. This most noble representative of the la strada model palette is a monocoque camper van. A completely new camping body based on the ladder-type frame chassis of Mercedes Sprinter was used. However, unlike the traditional partially integrated ones, the outside walls of la strada Nova do not consist of separated walls, floor and ceiling, which are connected to each other. The camping body of la strada Nova is manufactured in one piece from a cast of glass fiber reinforced plastics. The tailgates, doors and windows are mounted in the provided recesses. The good insulation, high strength and long lifespan are the result. With this elaborate construction, la strada Nova is already now a solitary presence in the German camper van landscape.

In the coming years, la strada is planning a continuous expansion of its European distribution network. Thereby the regional gaps will be closed and further countries will be included. The clearly positioned model palette is adapted to the new tendencies in the use of the small camper vans and is expanded in the medium term with new models. Thereby the la strada values of compact dimensions, solid materials and high-quality processing are always in the centre of the requirements catalogue.